Springtide Magazine » Five Books To Read On War and Its Repercussions

Ernest Hemingway was 18 years old when he volunteered as an ambulance diver for WWI, an experience so traumatic, he went on to pen several novels addressing the tactlessness of wars. In all his visits to five different battlefronts, he wasn’t able to reason with wars. “Never think that war, no matter how necessary, nor how justified, is not a crime,” he said.

As journalists, we feel the same way. Despite our journalistic principles pointing to objectivity and reporting facts, we can’t help our inclination towards the safekeeping of humanity. Going down the same line, war of any kind — on Ukraine, Palestine, India or Pakistan — marks the downfall of diplomacy and resolution through dialogues, a practice that is the foundation of journalism. Here are a few books explaining the violation of humanity through careful assessments of the consequence of war.

David Swanson is an author, activist, journalist and radio host preaching against torture and war. He was also a 2015 and 2016 Nobel Peace Prize nominee. Among all of his other books addressing a similar topic, War Is A Lie disproves every justification of war, especially those defended as necessary. The book addresses the propaganda and the execution of wars — most of them are not as spontaneous as you may think. 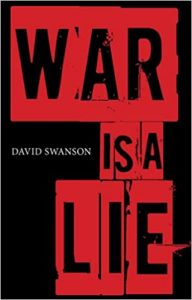 2. More Power Than We Know: The People’s Movement Toward Democracy – Dave Dellinger

From Yale to several battlefronts to prison – Dellinger has seen it all. War, he said, was evil and useless. Dellinger always argued that the alternative to war was brotherhood and the abolishment of capitalism. The book exhibits the superficiality of the elusive assessments of the Vietnam war’s end in 1975. Dellinger wrote about the mistakes and limitations of the antiwar movement in the ’70s, explaining how it could’ve been better and more powerful. He sensed a “people’s movement towards democracy” coming to life. This topic is especially relevant in the age of internet activism.

Five Books To Read If Unreliable Narrators Fascinate You

3. Non-combatants and others – Rose Macaulay

Macaulay writes about Alix Sandomir, a young woman who loses her brother on the front line. Aware of the lack of roles for women in the first World War, Alix begins her battle for peace. Macaulay, infamously a pacifist, has penned several literature against war. In a male-driven field, she contributed to the female criticism of war, explaining how the system is twice as repressive. Non-Combatants are women and people who choose not to fight or are physically unable to. The book, one of the first ones to elaborate on the moral and ideological arguments against war, is about how one can fight, and what they should be fighting for.

Holmes, another pacifist who continuously campaigned for the urgency of finding alternatives to war, writes about a pacifism in a philosophical sense – ‘the existence of a moral presumption against war, which, unless defeated, won’t justify war. He argues that most recent and notable wars don’t justify this presumption, making them unjust and criminal. Holmes also talks about the war system, which he describes as a ‘constellation of social, political, economic, religious and ethical practices and values necessary to wage war effectively’.

5. Nonviolence: The History of a Dangerous Idea – Mark Kurlansky

Kurlansky separates the idea of nonviolence in a philosophical sense and as a course of political action in this book. He speaks of the importance of nonviolence in ending wars, but also if it was a plausible way of fighting against the most oppressive regimes. He also talks about how violence suppressed the upholders of violence like Mahatma Gandhi and Martin Luther King. Kurlansky also distinguishes between Nonviolence and Pacifism, arguing the former is active while the latter is passive. The book also brings a whole new perspective to the events and persons in history. The core message implies that nonviolence is a more effective way of persuasion than violence, and that violence does not work.

Andrea Riseborough’s Oscar nomination has raised questions about its campaign