The Jaipur Polo Season 2022 sprung into action on September 5, and it will go on until October 9. Seven tournaments and one exhibition match will be played during this time.

Of these, two tournaments have already kicked off in this week. The season began with the 4 goal Sapta Shakti Polo Championship, which will take place from September 5 to 15. Five teams – Underdogs, 61 Cavalry, Salvo, RVC Polo and ASC Achievers are currently battling it out for glory. Simultaneously, the HQ 61 Sub Area Polo Championship also commenced from September 6, with seven tough teams in gruelling pursuit of the trophy.

The 19-year-old Ranshay Purohit, who plays for the Underdogs, followed his father’s footsteps and started playing the sport when he was only 11. At 14, he was one of the youngest Indian players to take part in the professional tournaments. “This year, I’m looking forward to playing as much as possible, and getting my handicap up,” he shares. Handicap, he explains, is a polo rating based on the performance of a player. “I want to get it up to 2 goals. I am scratch right now” (scratch is 0, rookies start at -2). 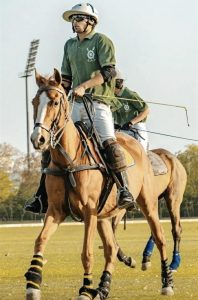 Tournaments like the ones currently taking place in Jaipur are extremely helpful for players to establish themselves and keep climbing the ladder of the sport. “The tournaments we play are the most important aspect for any player to grow. Being a part of these tournaments helps us show our performance and what we are really working for. For young players, if we play these initial tournaments well, then we are going to play the whole season. Because our performance is displayed on the field and the sponsors and big patrons can select us based upon our performances.”

The Underdogs have played matches in both the Sapta Shakti Polo Championship and the HQ 61 Sub Area Polo Championship. Ranshay tells us what a quintessential game day looks like for him. “I try to get a lot of sleep, and eat my meal at least three hours before the game. I reach the field at least an hour before and warm up on one or two horses. I talk to my teammates for 30 minutes. I leave all social media and my phone at least two hours prior, and just focus on the game. After the game, I leave everything on the field – good or bad. I don’t take anything back home.”

Where atmosphere is concerned, Jaipur boasts a polo culture that is unique to the city. “For me, the major X factor about Jaipur is the people, because they love polo. It’s a very, very old sport. Plus there is a lot of Maharaja culture here still – it’s the sport of kings and the king of sports. So there are a lot of spectators, a lot of crowd engagement.”

Madonna, A Long-Time Gay Icon, Might Just Have Come Out Herself

Although once known as a sport for royals and the elite, the perception of polo has changed greatly over the years, and many of those who compete professionally today have no associations with royalty. “Polo has totally transformed,” says Ranshay. “Right now, it’s in a totally different era. A lot of people who are playing as professionals in India don’t own any horses, but they’re getting paid a good amount of money.”

This change has occurred due to a major shift in the attitudes of sponsors, patrons and players towards polo. “They’re taking it more seriously. They’re putting in more money. Earlier, we used to normally train the Indian horses only, and we used to play the Indian thoroughbreds. But now people are ordering horses from foreign countries like England, Argentina and New Zealand, and are paying a good amount of money for them.”

That being said, there is still work to be done when it comes to making polo a more accessible sport for all. “The main problem behind why polo doesn’t have a good reach among people is that it’s a little expensive and it’s not easily available for everyone,” Ranshay says. “You need at least six, seven horses to play polo, and a good coach. You have to work at least three years off the field. It’s a dangerous sport. If we get affordable setups in India, even the common man or a boy from a middle class family can take up the sport, afford it and pursue it. Then the reach of polo will increase, and with that its popularity. The more, the merrier!”

First Sikh Woman Sworn In As US Judge

Brazil Riots: 1,500 Protesters Detained For Storming the Congress After President Lula’s Swearing In